Let’s have a duel between Scorpion pepper vs Ghost pepper!

Do you go crazy for scorpion peppers, which are beautiful on the outside but can be as hot as fire when we play with them?

Or do you like ghost peppers, also called “sneaky mother” because there is a fifteen- or twenty-second delay before the burn starts?

If you said “yes” to any of these intriguing questions, you should proceed to read this article in the way most suitable to your needs.

Short answer: Many people claim that ghost pepper and scorpion peppers possess an insane level of scorching heat! It’s like your lips and tongue buzz with the zing and tingly feeling you get from eating them!

Thus, let’s make a clear distinction between these two peppers!

Here, you’ll learn about the difference between them

What Is Scorpion Pepper?

In the Caribbean, it’s called the Trinidad Scorpion pepper – a type of chili pepper.

You can find it only on the islands of Trinidad and Tobago.

These red, wrinkled peppers have tails that look like those of a scorpion, which is why they’re called scorpion peppers.

They’re known for their strong hot pepper flavor and heat.

What Is Ghost pepper?

The ghost pepper is also popular as Bhut Jolokia.

You may not be well aware of it, but it came from India and was called Bih Jolokia and Nagahari and Raja Mircha and Raja chili.

The word “Bhut” comes from the Bhutias, who live in the Indian country.

In this case, “ghost,” which means “heat,” was used because it sneaks up on people eating it.

The ghost pepper is a small chili that is usually red or orange.

It can be bumpy or smooth on the outside.

The peppers are about 2.5-3.5 inches long and about 1 inch wide, the same size as your thumb.

The 5 Key Differences Between Scorpion Pepper vs Ghost Pepper You Might Now Know!

Here, you’ll learn about the difference between them: their composition, color, taste, the way we use them and their price

The Trinidad Scorpion is different from the Ghost pepper because of its appearance.

Scorpion peppers are easy to spot because of their bulbous wrinkles and a length of one to two inches.

Even more important, it always has a scorpion stinger, making them look scary.

Also, they have green stems, green leaves, and creamy-yellow flowers that make up the plant’s features.

Meanwhile, this is what happens when a Ghost pepper is fully grown: It turns a dark red color.

Each kind can grow up to about 3.5 inches.

When you touch their long, pendant-shaped pods, they always have rough skin.

It’s hard to decide which pepper tastes better because of the higher spicy level.

Besides, most people will only taste them a little bit in hot sauces and salads with many other ingredients mixed in.

At the same time, both of them have a surprising amount of sweetness from the fruit.

The Trinidad Scorpion tastes more like a Thai chili pepper than a ghost pepper, which has a smoky taste.

It has a delicate fruity taste that makes it a mix of sweet and spicy.

There is a reason the little wrinkled peppers look scary.

How? That is because they are famous for being one of the hottest peppers in the world!

However, Ghost peppers also have a very strong fruity and sweet chili taste that is unique.

Hence, it takes about 30 to 45 seconds for the heat to appear in your body.

As the heat rises, you should expect to sweat, have watery eyes, and hiccup. After all, ghost peppers aren’t just hot.

They taste like many other peppers you might have tried, but it seems that many chili fans prefer them to other peppers.

When handling Trinidad Moruga Scorpion Pepper, you should be very careful!

Why? It is one of the world’s spiciest peppers, and it should be handled with extreme care at all times.

Som you need to use them sparingly and only when you need a lot of heat.

Additionally, you can use it in baking cornbread or mix it with ground beef to make a Scorpion Burger.

By crushing dried Scorpion peppers in oil and then filtering the mixture, it will give you a hot chili oil!

When it comes to curries, pickling brine, and chutneys, the ghost pepper is used to create tasty yet spicy recipes.

Aside from that, it is a famous ingredient in spicy sauces and meals in the West.

Ghost peppers can also make their way into sweets!

Because the ghost pepper is so hot, it’s a staple of many eating contests and drunken challenges worldwide.

Additionally, both ingredients are commonly accessible in supermarkets and online retailers.

1. Can I grow ghost peppers indoors?

The best way to grow ghost peppers is to grow them indoors or in a greenhouse where the temperature can be kept at 75 F. (24 C.).

2. Which is the hotter Scorpion pepper or ghost pepper?

With an average Scoville rating of 1,200,000 SHUs, the Moruga Scorpion is stronger than the Ghost pepper.

Over 2 million Scoville heat units were recorded for each pepper.

So, it means that one Scorpion could be twice as hot as a Ghost pepper.

3. How do you eat Scorpion peppers?

The name “scorpion” comes from the endpoint of the pepper, which looks like a scorpion’s barb.

There are 1.2 to 2 million Scoville units in this red pepper.

It likely tastes like a scorpion’s barb as well.

A chili pepper expert and the director of the Chile Pepper Institute, Paul Bosland, said that “You take a bite. It doesn’t seem so bad, and then spiciness builds, builds, and builds.” (*)

4. Where are scorpion peppers grown?

Peppers can grow in a tray with soil mix.

Plant the pepper seeds about 1/4 inch deep in the tray eight to 10 weeks before the last frost.

Water the seeds with hot water as soon as you plant them.

5. Can ghost peppers burn your stomach?

People who mostly eat ghost peppers do not suffer from stomach upset or burn.

To clarify things, they can’t burn, tear, or create a hole in your esophagus or body part.

Here you are, now you might have a better understanding of Scorpion Pepper vs Ghost Pepper.

Both Trinidad scorpions and ghost peppers have very different tastes, even though they look the same physically.

These peppers have a very high level of spiciness that is not fit for raw consumption.

Ideally, these peppers are being processed into other products like sauces.

Although spices may have a delicious effect on food, remember that you must consume them in moderation.

Humans have a unique trait that other animals don’t have: We often look for certain foods because of their spice. 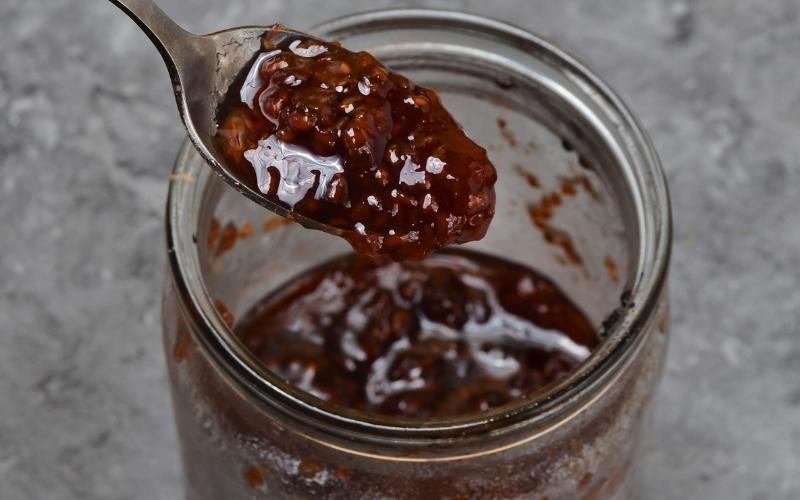